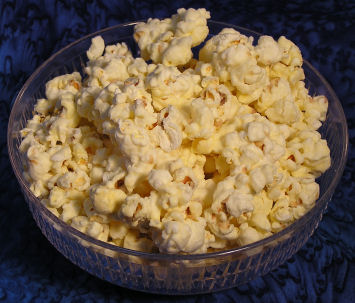 A fondness for microwave buttered popcorn could have led a 53-year-old man in Colorado to develop a serious lung disease that until now has been found only in people who work in the popcorn plants.

The culprit is in diacetyl. This is found naturally in milk, cheese, butter and other products. When heated, diacetyl becomes a vapour and when inhaled over an extensive period of time will create havoc in your lung. It seems that the small airways in the lungs will become swollen and scarred. Sufferers can breath in deeply but they have difficulty in exhaling. The severe form of the disease is called bronchiolitis obliterans or “popcorn workers’ lung”. This can be fatal.

This Colorado man was a non-smoker but was overweight. When he became increasingly short of breath, doctors thought he had hypersensitivity pneumonitis. This is an inflammation of lung caused by chronic exposure to bacteria, mould or dust, something that farmers and bird ethusiasts suffer from. But our guy didn’t go near any mould or bird droppings.

A Dr Cecile Rose from the National Jewish Medical and Research Centre in Denver, however, noticed the similarity he shared with the popcorn workers. She asked if he was around popcorn a lot. That’s when Mr Popcorn said he had been eating microwave popcorn at least twice a day for more than 10 years.

Well, when he inhaled the steam of the heated popcorn, he was inhaling diacetyl. So don’t over-eat microwave buttered popcorn, don’t inhale the steam when you open up the bag!

What happened to the guy? Well, he stopped eating microwave popcorn. In 6 months, he lost 23 kg and his lung condition improved slightly.

AmazingSprouts.com – The most effective & easiest guide on how to grow sprouts in home
Healthy-E-Meals.com for easy to prepare healthy recipes.
The Raw Secrets – The Raw Food in the Real World by Frederic Patenaude